Walnut Creek Ranch started in 1995.  I had been riding and training my own

personal horses for 30 years and decided to finally give the place a name.

I had been involved with Arabians, Morgans, Thoroughbreds, Quarter horses,

Fox Trotters and Warmbloods over the years. When I saw my first Andalusian

in the mid 1980's, the Andalusian instantly became my premier choice for my

future riding companion.I couldn't afford one until 1998 and found a yearling; a gray

stallion that started my on-going love affair with this magnificent and noble breed.

I sold the first stallion after breaking him to saddle, because my dream

had always involved a black stallion. You bond with these horses

so closely, for a lifetime, and they are such a substantial investment

that I truly feel you should get exactly what you desire. This is why

they purchase an in-utero foal from me. I looked at several black colts

during my search until Rico instantly caught my eye.

After working with these first two wonderful stallions, I decided I needed additional Andalusians. You will find that it is very difficult to have just one. Their nobility, intelligence, beauty, courage, humor, willingness and efforts to please, far exceed any other breed.
They will grab your heart and not let go.

Rico had impressed me so much, that I decided to do some more research before purchasing

some mares for him. I spoke with many, knowledgeable breeders who were happy to share their

passion and love of this horse and I thank them for their insights. After reviewing the information,

and knowing what I wanted to produce in a breeding program, I decided to go with the

P.R.E (Pure Raza Espanola). I had this in mind when I had purchased Rico, and my experience

with him and guidance from others convinced me that the P.R.E. was the epitome of this breed.

I had seen enough "Americanization" of the Arab and Morgan over

the years, that I welcomed the chance to have the Spanish judge

my horses for their stud book.They have kept this breed true and

consistent for many centuries and I value their commitment, love

and dedication to the P.R.E.Participating in the inscription and revision

process of the Spanish stud book would only enhance my breeding program.

I saw my first black Andalusian in 1987. He was the imported Escalera stallion Dejado, owned by the Parras. He had impressed me enough that I wanted some daughters of his. I found two (Hilandera and Golosa), and my mare herd was started. I saw that the breed was fast becoming very popular with dressage enthusiasts and thus began my search for a big, forward moving black mare. Novena TCV, fit the bill.

She is pictured here below on the left and with her black P.R.E. twins on the gallery page.

By then, I had Rico working under saddle. His work ethic, athleticism and strong build made me take a longer look at the Guardiola breeding on his dam's side.  I found that the Guardiola horses had been bred for these characteristics. Guardiola blood lines are extremely rare in the U.S and even fewer are black. I decided I may need to import in order to find a black Guardiola bred mare. Through the wonderful Lanys Kaye-Eddie, I found the perfect mare right here in the United States, Mirame ORO, pictured on the right below.See more about the Guardiola Stud Farm on it's page.

This incredible black mare was not only half Guardiola and linebred to Centella V, the Guardiola Champion of Spain; but she was a daughter of the incomparable Indiano XVIII. To top it off, she was gorgeous, correct and had the extended movement that is so desirable. She became the crown jewel of my broodmare band.

In 2013, I again looked for a superb broodmare to compliment Rico

and share the crown with my black Indiano XVIII daughter.

had been sold to continue their lives as riding partners.

Since watching Bo Derek in Bolero, I had always wanted to produce a palomino P.R.E.

but until now, it had been an almost impossible undertaking.

Even though I was searching for that "pot of gold" in color; quality and bloodlines were still a top priority.

Because they were still so rare, I knew I would have to find an imported mare

could give me the gold I was seeking. It took a while; but I found her.

and her dam Urrea, was a Military branded mare of impeccable bloodlines.

Her movement was breathtaking.

And so. . . Sentencia PI, joined my select broodmare band.

In 2002, I decided I needed a bigger place for my growing herd of Andalusians. After several years of searching, I found the right property. 40 acres of beautiful brome grass pastures with a creek running through all the pastures.Over a mile of pipe fence was installed. Barn plans were drawn up and construction started. This time, it was going to be done exactly the way I had always wanted.
We call it: "The Place That Rico Built" since he had generated the funds to make it possible.

Concrete stalls with custom grill work were put in.

Foundation forms were set up and the stalls

were poured before any framing of the building was done.

to an 8 acre stallion pasture surrounded by 6 foot pipe fence.
Broodmare stalls were put across the aisle, along with a run in for additional

to the bedroom TV for 24 hour viewing of mares that are due to foal.

The mare stalls and run-in are connected to the 10 acre mare brome pasture.

A 60' x 120' indoor arena was added and attached to the stall barn. I felt an indoor arena was necessary to provide consistent footing for Rico's reining training and sliding stops, as well as a secure footing and cover from the elements for breeding mares.
I also designed a breeding apparatus in a corner of the arena. It had a walk-in foal catch pen and a strongly built front panel. This way, the foal is safely caught and out of harms way. The mare can then put her head over into the foals' pen and brace herself against the panel while being bred live cover. Rico is so well mannered that I can now safely breed a mare with a foal by myself if needed.

My dream is now a reality. 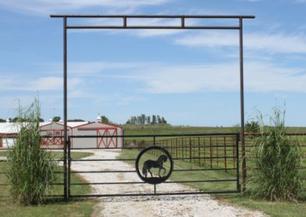 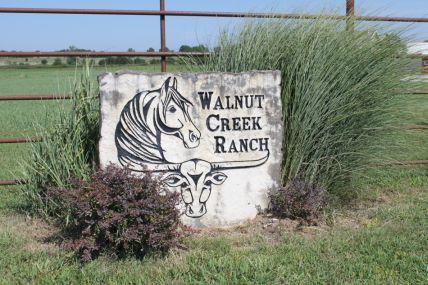 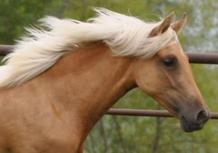 .....And lo and behold, she produced 3 gorgeous "pots of gold" out of her first 4 foals with Rico.

I am so proud of these gorgeous high quality  palomino Walnut Creek offspring! 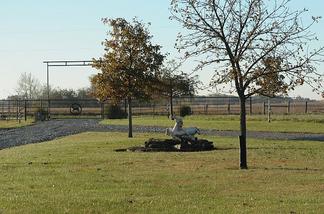 The black stallion of my fantasies has become my riding partner, a trail horse supreme, a National Show Champion, and the horse of a lifetime. We have done this together; as a team....Rico has never been to a trainer, and the fact that only his amateur owner has accomplished all this with him is a testament to the breed. He has proven himself over and over; not only as a true friend, but a prepotent sire who improves every mare that he has bred. He has provided wonderful companionship, as well as the means to build the horse facility I have always wanted. He still gives me chills when I see him poised and looking off in the distance.

My mare herd is complete for now. The girls all have wonderful bloodlines and represent not only the traditional style, but have good movement to complete the package.
My ranch fulfills my every need and is a smooth-operating and peaceful place. I can sit on my porch or look through my windows and see mares and foals grazing on lush pastures on one side and my black stallion with his mane and tail flowing, galloping across the other pasture.
I have achieved everything I have ever desired. I am proud of my horses, my facilities, my breeding program and each and every foal that I produce.
My breeding goal is to produce P.R.E. foals whose conformation is classical and baroque . These foals will be strongly built with good bone, be extremely athletic and can grow up to do whatever discipline their new owner desires. Couple that with a temperament that has courage, intelligence, a strong work ethic and a willingness to please.  They will have proven bloodlines to produce future outstanding P.R.E.'s and a majestic beauty to take your breath away 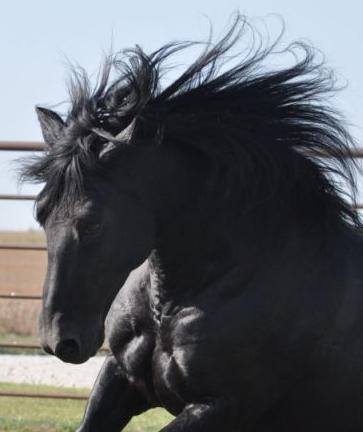 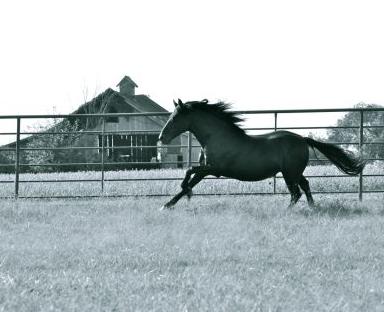 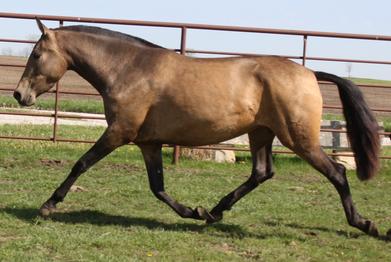 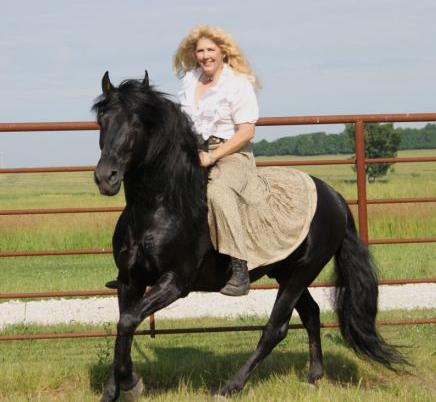 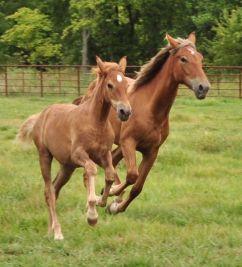 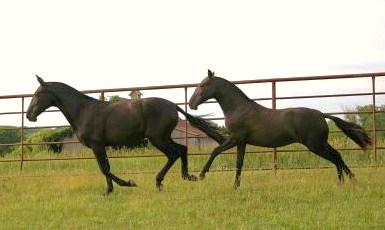 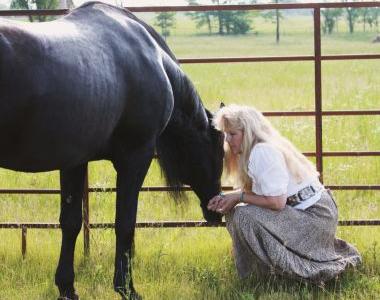 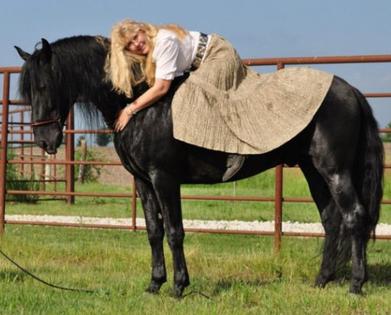 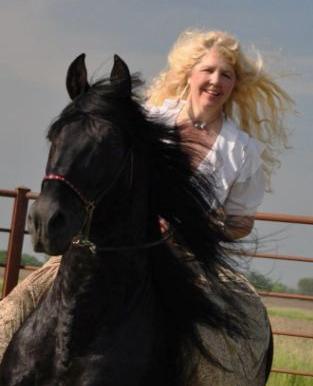 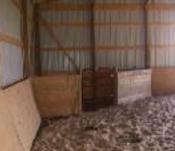 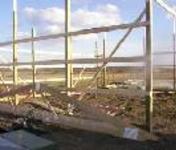 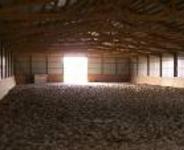 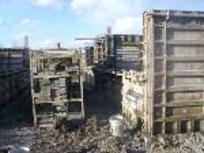 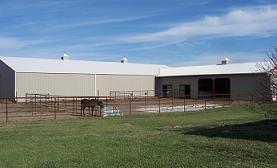 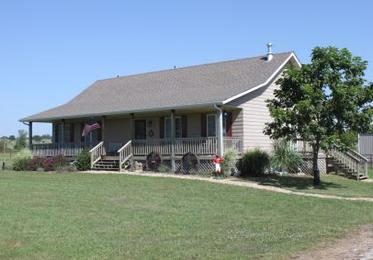 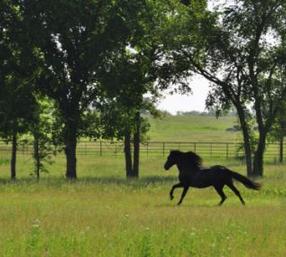 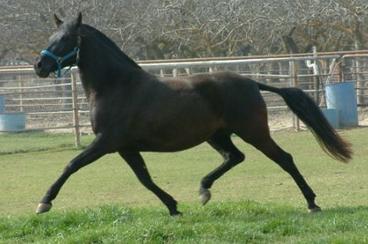 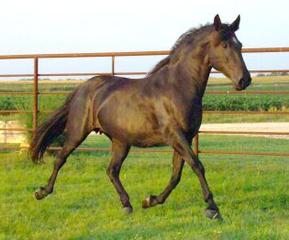 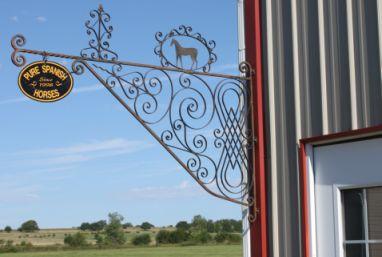 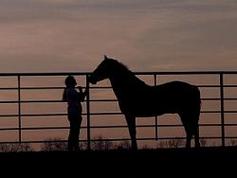 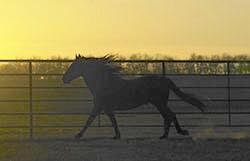 I experience daily the joy, awe and success that the P.R.E. Andalusian has brought to my life.